The following video from the Eno Center for Transportation defines some of the main technology types associated with the future of transportation.

AVs use sensors and systems to understand and navigate their environment with little to no human assistance.

This autonomy varies based on the level of human assistance. The Society of Automotive Engineers defines the five levels of autonomy as follows:

Connected and (fully) automated vehicles (CAVs) have the capability of connecting with the outside environment including infrastructure and other vehicles. There are five main types of connectivity:

Chapter 2 of An Assessment of AVs: Traffic Impacts and Infrastructure Needs (Kockelman et al., 2017) and chapter 2 of Transportation Planning Implications of Connected and Automated Vehicles on Texas Highways (Williams et al, 2017) both define the types of connectivity and the levels of autonomy further.

Throughout this website, highly and fully automated vehicles (Level 4 and 5) are referred as AVs, in which drivers have the option to control the vehicle or not. For discussions under impacts, such as benefits and challenges, in which Level 3 automation or lower requires the driver to be able to take control at all times, Level 3 automated vehicles under these circumstances are not ready to bring the discussed benefits (provided by Level 4 or 5) and are facing more difficult challenges.

These technologies are ultimately being developed to address a few main problems that we encounter in today’s world of transportation. 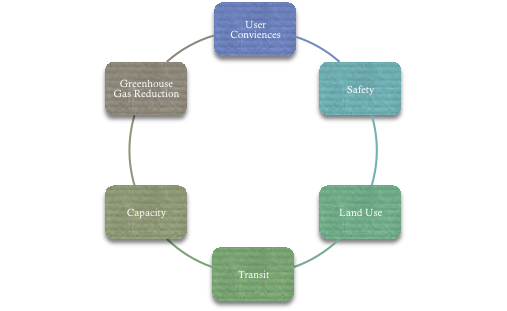 User Conveniences: AVs offer many conveniences to its users such as mobility for those who cannot drive on their own, the ability to focus on other tasks while en route, reduced stress associated with driving, a lower cost of deliveries, and the ability to select the appropriate vehicle for the task.

Safety: Currently, human error is the leading cause in the vast majority of crashes. According to data gathered by National Highway Traffic Safety Administration (NHTSA) from 2016:

Through automation, AVs do not have the same human imperfections that tend to lead to crashes. They can be programmed to avoid breaking laws, and they do not get distracted or fatigued. According to NHTSA’s 2015 Crash Stats, driver error is believed to be the main reason behind over 90% of all crashes (NHTSA, 2015). AVs have the potential to eliminate all of the crashes attributed to human decision-making.

Land Use: A large proportion of the land in cities is used for parking. Through the use of ride-sharing services, AVs can drastically reduce the need for parking. This would leave space for more productive land use measures.

Transit: AV technology opens the door to many possibilities in the realm of public transit. Eliminating the driver allows for much more flexibility and efficiency in existing forms of transit like ride-sharing services and buses. A more efficient system can lower usage rates and thus encourage the use of public transit, decreasing roadway congestion.

Currently, significant roadway sections are underutilized because of the required gaps between cars. These gaps, both headways and space between lanes, could be reduced as vehicles become more widely automated and connected to the outside world. One assessment conducted at the University of South Florida indicates that once we reach the height of automation, maximum lane capacity can increase by as much as 80% (Pinjari et al., 2013, pg. 4). Though this may take many decades, automated vehicles will likely reduce congestion by simply preventing crashes that tend to cause surrounding drivers to be delayed.

Greenhouse Gas Reduction: According to the EPA, transportation accounted for 27% of greenhouse gas production in the US in 2015 (EPA, 2017). Through the use of shared electric AVs and increasing use of automated public transit, Greenblatt and Saxena find that AVs can reduce greenhouse gas emissions by up to 94% as compared to conventional vehicles (Greenblatt and Saxena, 2015). Concurrent technology, such as brake smoothing will also lead to a reduction in vehicle emissions by limiting fuel consumption.