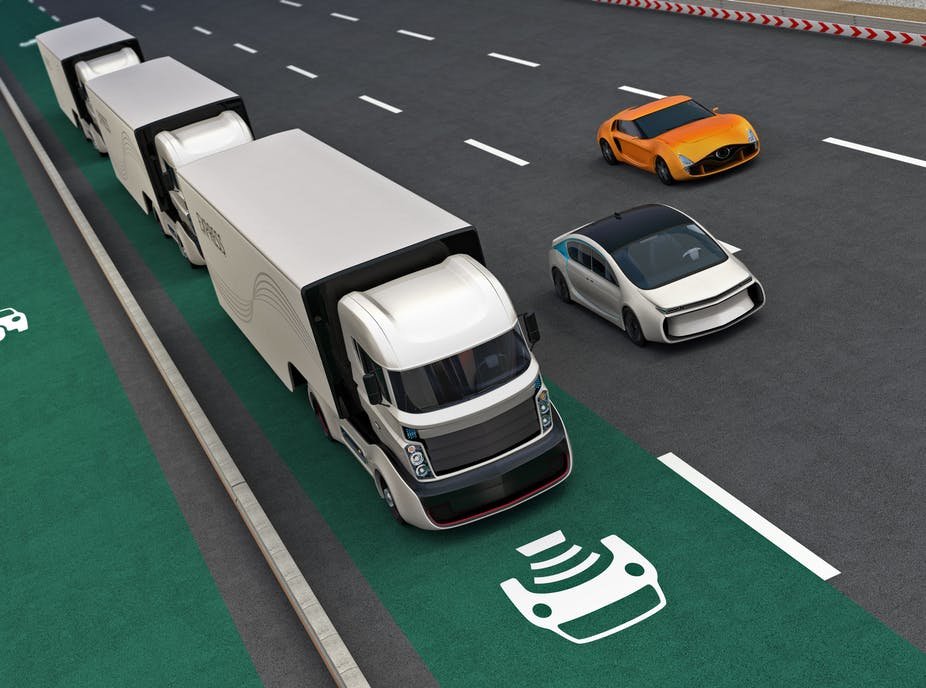 Self-driving technology has the potential to transform both passenger and freight transport systems. The trucking industry can expect to see similar benefits like increased safety and better fuel economy. We could expect a paradigm shift in public services, user experiences, mode choices, business models, supply chains and policymaking. As noted by the digital and content marketing company Fronetics, “70% of total U.S. freight tonnage, an equivalent of 10.5 billion tons of freight per year, is transported via trucking. 38 billion gallons of diesel fuel are consumed each year to keep goods moving in the United States. The industry generates $750 billion in revenue each year and is expected to grow rapidly” (Fronetics, 2017).

The stages of automated truck development are shown in the diagram below. We are currently at stage 4, in the process of high automation (Walker, 2018), as we can see examples like highway driving tests (OTTO, 2018) and platooning tests (Daimler, 2018). An article by FleetOwner predicts that “the most expensive stage of the truck automation process, out of the five stages (diagram below) identified by Roland Berger, will be Stage 3, which represents conditional automation in trucks in order to operate within platoons as well as pilot themselves in certain highway scenarios” (Kilcarr, 2016).

Once full automation (stage 5) is achieved, self-driving trucks have the potential to reduce the shift or eliminate the responsibilities of the driver. “Fully automated self-driving trucks or Atrucks are those that can leave the truck terminal and travel to a destination without human intervention or presence in the truck cab (Goodwill, 2017). Atrucks may be equipped with other automated functions, like drop-offs and pick-ups, but most experts expect an attendant on board, doing other types of work, sleeping as needed, and ensuring thoughtful deliveries and pickups,” (Huang and Kockelman, 2018, pg. 2). This will lead to a more efficient delivery process, requiring fewer people to be involved, and allowing for increased productivity during travel.

Trucking companies are also preparing for the advent of Atrucks. DHL has already shown the implications on freight travel through the lens of Atrucks and use cases for the logistics industry (Heutger et al., 2014). FedEx is also considering small vehicles that could drive around neighborhoods and make deliveries without human drivers (Woyke, 2017). In 2017, UPS conducted drone delivery trials in Florida in partnership with delivery vehicle manufacturer Workhorse Group (Camhi, 2018).

In terms of long-distance trucking, Embark completed a coast-to-coast test of its automated truck design in 2018, from Los Angeles, California to Jacksonville, Florida (Clevenger, 2018). The modified Peterbilt tractor, outfitted with an array of sensors and guided by self-driving software, traveled 2,400 miles over 5 days with just Level 2 automation (and an assisting driver, for various sections of the drive).  On November 6, 2017, China’s TuSimple’s (2017) SAE Level 4 truck got its first public test in Shanghai’s National Intelligent Connected Vehicle Pilot Zone: “TuSimple’s computer vision based multi- sensor fusion approach uses an array of cameras to scan the surrounding environment, and LiDARs and millimeter-wave radars for redundancy. TuSimple’s camera based solution, with the aid of adaptive headlights, allows the truck to see over 300 meters away at all times. This enables the truck to make safe and efficient decisions.” (TuSimple, 2018)

Driver shortage, as well as the related aging trucker demographic, have been long-standing issues. However, 2018 has seen an improvement in the U.S. economy, coupled with the rapid growth of e-commerce (Prevost, 2018).  Driving jobs must become more appealing and accessible to attract a younger demographic, and the industry must become more efficient, which the automated trucks can help. Automated trucks have the potential to improve efficiency on long-haul routes and the overall trucking cost as well as the total cost of shipped goods. Cheaper goods also lead to larger consumption, and thus drives truck freight volume up. A study from UberATG shows that when 1 million “self-driving” trucks are operating on highways, you would expect to see close to 1 million jobs shift from long haul to local haul, plus about 400,000 new truck driving jobs will be needed to keep up with the higher demand” (UberATG, 2018).

As ridesharing company Uber’s Advanced Technologies Group suggests, “every self-driving truck will need partners to cover local routes and bring loads to and from transfer hubs. Growth for self-driving trucks will therefore mean growth for truck drivers, on top of all the things we move getting cheaper and arriving faster. Additionally, those local haul truckers would be picking up and dropping loaded trailers, meaning big reductions in wait times at loading docks. And for drivers who prefer long haul, there will still be many routes across the country for years to come” (Uber ATG, 2018).

However, we still cannot tell exactly how fast self-driving trucks will become part of the industry, or how much impact they will have in the coming years. For example, autonomous delivery robots that have been implemented in a few cities in the US (e.g., DC, San Francisco) and internationally (e.g., London). They have the potential to reduce the labor of truck driver if they can be fully applied in the trucking industry. A startup called Starship Technologies, with offices in London and Tallinn, Estonia, has announced an autonomous delivery robot that promises to do everything that a delivery drone can do (and more), except from the ground and with a realistic chance of actually happening (Ackerman, 2015). Furthermore, Amazon has been granted a new patent by the U.S. Patent and Trademark Office for a delivery drone that can respond to human gestures (Shaban, 2018). Furthermore, the responses from the public vary widely and the technology has some issues in its current state (operations, regulations, etc). Kroger, one of the nation’s largest supermarket chain company, is teaming up with Nuro in June 2018, a two-year-company started by two veterans of Google’s self-driving car team, to launch a fully automated delivery service (Hawkins, 2018). To start out, Nuro will use a fleet of self-driving test vehicles with human safety drivers to make deliveries for Kroger’s grocery stores. Customers can track and interact with the vehicles via a Nuro app or Kroger’s pre-existing online delivery platform.

Kroger, the world’s 3rd largest supermarket chain, teamed up with new entrant Nuro in June 2018 to launch a fully automated delivery service (Hawkins, 2018). Initially, Nuro is using a fleet of self-driving test vehicles with human safety drivers to make deliveries for Kroger’s grocery stores. As described on the website, “Customers can track and interact with the vehicles via a Nuro app or Kroger’s pre-existing online delivery platform.” In addition, Waymo has worked with Walmart and other businesses in the Phoenix area to expand its AV tests. Waymo’s 400 “early riders” can now take AVs to and from the Walmart in Chandler, Arizona, after purchasing groceries online, from Walmart.com (Santora, 2018). Toyota and Pizza Hut are launching a partnership that could lead to self-driving pizza deliveries (Matousek, 2018). Toyota revealed the e-Palette, a self-driving concept vehicle, at the Consumer Electronics Show in Las Vegas in January 2018 and plans to start testing the vehicle as early as 2020. The city councils of Arlington and Dallas, Texas, are formally encouraging private companies in the growing AV industry to come, test, and deploy robotic delivery devices, including Marble Company (Schrock, 2018). Another important advancement in the automated freight transportation is automated platooning. This involves a number of trucks following each other at a close range and being connected by vehicle-to-vehicle (V2V) communication. The first truck can be partially automated and manually driven.

The below video is a partially automated truck platooning demonstration that uses V2V technologies like Cooperative Adaptive Cruise Control (CACC) and Dedicated Short Range Communications (DSRC), or probably the 5G C-V2X communication technology to maintain speeds, coordinate braking and maintain distances between the trucks. This is a part of the USDOT’s (United Stated Department of Transportation) ongoing efforts to improve efficiency in the nation’s freight transportation network.

Atrucks have the potential to generate a surge in freight capacity by utilizing round-the-clock operations, saving fuel, and improving efficiency, thus reducing the overall cost of commercial freight transport. A research study conducted by The University of Texas at Austin concluded that, “heavy commercial trucks may be the first industry to implement CAV technology in order to increase efficiency. The opportunity for drivers to do other work or rest during long drives may allow heavy trucks to travel for longer periods of time, at lower cost,” (Clements and Kockelman, 2017, pg. 1). The paper also notes that the freight industry can expect to gain more than $100 billion annually due to increased efficiency.

Huang and Kockelman (2017) conducted a research study on truck trade flows anticipation across the U.S after the introduction of automated trucking. They predict that truck flows in U.S in ton-miles will rise up to as much as 11.2%, due to automation’s lowering of trucking costs, while rail flow values fall by 4.8%. Introduction of Atrucks favors longer truck trades, but rail’s low cost remains competitive for trade distances over 3,000 miles. Human-driven trucks will dominate in shorter-distance freight movements, while Atrucks will dominate at distances over 500 miles.

Job Loss: Atrucks have the potential of saving costs in the long run, but agencies will incur high initial capital investments. A series of articles by MBA and graduate students at the University of New Hampshire suggest that automated trucking will not have a very significant negative impact on the labor industry as truck drivers are not limited to driving (Fronetics, 2017), but do other ancillary delivery functions like checking inventory, inspecting loads, and placing orders (Fronetics, 2017). Automated trucks could reduce the demand for drivers by 50-70% in the US and Europe by 2030, with up to 4.4 million of the projected 6.4 million professional trucking jobs becoming redundant (International Transport Forum, 2017).

Interestingly, a new research report commissioned by the American Center for Mobility (2018) estimates that not too many U.S. truck driver jobs will be lost or negatively affected. “Due to existing truck driver worker shortages (in the U.S.), and the belief that automated technology will largely support truck drivers instead of replacing them, truck drivers are not likely to be displaced in large numbers during the next ten years that the study covered. Also, limousine and bus/transit drivers who are executing services that necessitate face-to-face interaction or passenger assistance, such as luxury services and para-transit, are less likely to be displaced by automated vehicles in the foreseeable future.” (American Center for Mobility, 2018)

Specialized Training: Hardware and software of the Atrucks will have to be periodically maintained to ensure safety. While maintenance can be provided by third party servicers, education and training will be required for the drivers to handle technical hurdles on the road, if any.

Infrastructure Requirements: A report by the American Transportation Research Institute suggests that, “roadway infrastructure conditions, which are generally outside of the control of the private sector, play an important role in the facilitation of AT technologies. For example, lane markings must be visible to video camera systems. Signage must be correct, visible and appropriate. Pavement quality may also cause issues.” (Short and Murray, 2016) Sufficient infrastructure for Atrucks will require investment on the part of the public sector.

Other: In the table below,  ATRI outlines some crucial Government impediments to automated trucking deployment (Short and Murray, 2016).

You may read about industry-wide benefits on the Economic impacts page. For more information on preferences and mode-choice impacts on long-distance travel, please refer to the mode choice page.