Survey results for Texans shown below, enumerate their attitudes toward self driving vehicles. Such surveys can help shape the policies for the region.

The USDOT does not currently have a comprehensive plan outlining the overall goals or a plan to monitor progress. The DOT recently formed a group to lead policy development in the future but has not announced a detailed time frame or scope of work. The NHTSA’s Federal Automated Vehicles Policy (FAVP), issued on September 20, 2016, represents a significant step in the development of a federal regulatory framework to guide the development of automated vehicle technologies (Malley and Reindl, 2016). The FAVP is a comprehensive document, over 100 pages in length, addressing many facets of the regulation of automated vehicles (NHTSA, 2016). The policy consists of four parts:

Part 1: Vehicle Performance Guidance for Automated Vehicles. It has the greatest practical significance because it sets forth a “Safety Assessment” that manufacturers are expected to perform prior to the testing or deployment of automated vehicles on public roads.

Part 2: Model State Policy for Automated Vehicles. In general, the federal government (through the NHTSA) regulates the safety of the vehicles themselves, while state governments regulate the use of those vehicles—e.g., registration of vehicles, licensing of drivers and operation of the vehicles.

Part 3: NHTSA’s Current Regulatory Tools. It summarizes existing NHTSA regulatory authorities and describes how those authorities can be applied to address the introduction of automated vehicle systems.

Part 4: Potential New NHTSA Regulatory Tools. NHTSA identifies a range of potential new regulatory tools that could be adopted, recognizing that its existing tools may not be well-suited to the rapid pace of innovation in automated vehicle technologies.

NHTSA encourages collaboration and communication between State, Federal and local governments and the private sector as AV technology develops (Transpogroup, 2017; AV America, 2018). For topics like equity, VMT, technology, land use, safety, GHG, and goods, movement and services, “NHTSA has the authority to identify safety defects, allowing the Agency to recall vehicles or equipment that pose an unreasonable risk to safety even when there is no applicable Federal Motor Vehicle Safety Standard (FMVSS),”  (NHTSA, 2016 p.7). Furthermore, “in 2016, NHTSA adopted the SAE J3016 definitions as their standard. These were issued as policy and not regulations. States retain their responsibilities for vehicle licensing, registration, traffic laws and enforcement and motor vehicle insurance and liability. NHTSA continued preemption for interpretations, exemptions, notice, and rule-making and enforcement authority. Manufacturer responsibility to determine their system according to SAE J3016 standard,”(Kockelman and Loftus-Otway, 2017).

Policies regarding AVs must inform the following topics:

A vehicle driven by a computer on public roads opens the possibility of many insurance and liability issues. California law (CIS 2013) requires 30 seconds of sensor data storage prior to a collision to help establish fault, assuming that the AV has been programmed and tested properly (Kockelman et al., 2016). Liability, security, and privacy concerns represent substantial barriers to widespread AV technology implementation. These issues should be addressed through regulations to give manufacturers and investors more certainty in development, as “without clear legal language saying otherwise, the person using the AV is still considered the driver and would have the same legal obligations as any other driver in the state,” (CSG, 2016 p. 5). Liability standards should strike the balance between assigning responsibilities to manufacturers without putting undue pressure on their product (Fagnant and Kockelman, 2015 p. 16).

Travel demand simulation results suggest that traveler behaviors will change significantly once AVs are available. Over 60% of CAV owners would prefer empty repositioning to on-site parking, in order to avoid parking costs. However, empty repositioning adds empty-VMT (vehicle-miles traveled) to the network and makes transit use less attractive (Liu et al., 2017). Consequently, the TxDOT, cities, and counties should consider constraints on all empty-vehicle travel, unless it is by an operator managed fleet that is held to a maximum share of VMT driven empty (e.g., 10 percent, with lines for additional empty driving) and time- and location dependent (congestion-based) road pricing should be adopted (using the GPS, DSRC or 5G communication technology that connected vehicles require). SAVs will bring rather dramatic changes in vehicle ownership and travel patterns. They can add large numbers of empty, but relatively short, repositioning trips to reach the next travelers (Kockelman et al., 2016 p. 2).

Credit-based congestion pricing (CBCP) can be a novel strategy proposed as a policy. A revenue-neutral policy where road tolls are based on the negative externalities associated with driving under congested conditions, its generated tolls are returned to all licensed drivers in a uniform fashion, as a sort of driving “allowance.” Essentially, the “average” driver pays nothing, while frequent long-distance peak-period drivers subsidize others, in effect paying them to stay off congested roads. (Kockelman and Kalmanje, 2005 p. 1)

This is a major concern with the storage of data. Below are various recommendations for cybersecurity

As the NHTSA notes, “manufacturers and other entities should have a documented process for testing, validation, and collection of event, incident, and crash data, for the purposes of recording the occurrence of malfunctions, degradation, or failures in a way that can be used to establish the cause of any such issues,” (NHTSA, 2016 p. 17).

Texas’ leadership in CAV testing allows it to play a leading role in influencing the development of the technology. Recommendations, including short-term, mid-term and long-term practices for shaping legislative policy on CAVs, position Texas as a national leader in using the market to encourage even smarter technological innovation (Kockelman et al., 2016).

As noted in the legal section of a 2016 study sponsored by the TxDOT, “the speed and nature of the transition to a largely AV system are far from guaranteed; they will depend heavily on purchase costs, as well as licensing and liability requirements. Nevada has already processed AV testing licenses (on public roads) for Google, Continental, and Audi, subject to certain geographic and/or environmental limitations (e.g., the autonomous operation only on the state’s interstates, for daytime driving free of snow and ice). On February 26, 2018, the Office of Administrative Law of California approved the driverless testing regulations. Both licensing requirements from California and Nevada include a minimum of 10,000 autonomously driven miles and documentation of vehicle operations in a number of complex situations” (Kockelman et al., 2016).

Nevada’s legislation contains 23 lines of definitions and broad guidance to its DMV, while California’s is more detailed and with specific direction to their DMV (to establish safety and testing specifications and requirements). Without a consistent (or at least congruent) licensing framework and safety standardization for acceptance, AV manufacturers may face regulatory uncertainty and unnecessary overlap. (Fagnant and Kockelman, 2015 p. 12) 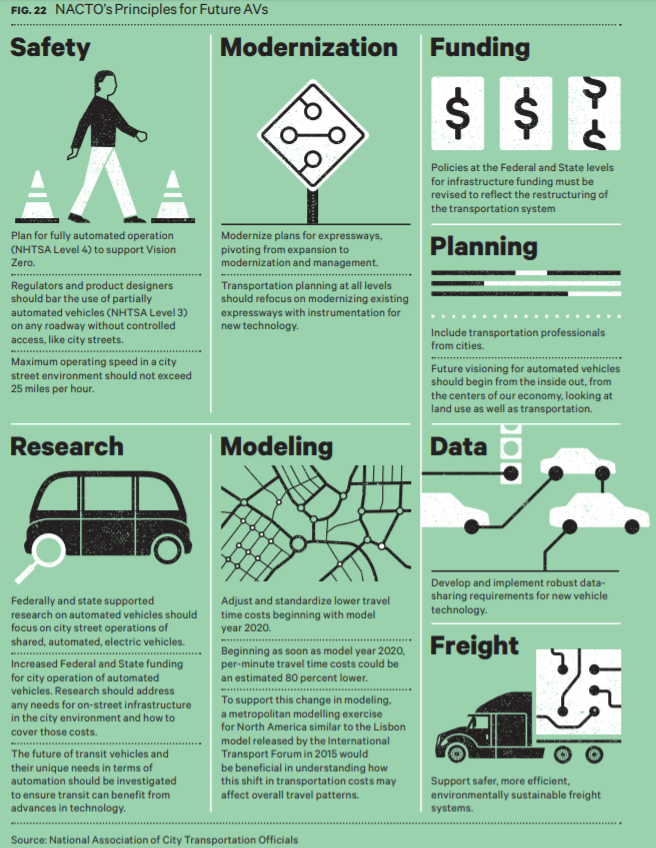